Ever since I switched over to github to host my NDifference project I have been missing CI builds and looking for something better than running a script locally to check out code, build and run tests.

Eventually I discovered Travis CI which is exactly what I had been dreaming about, a cloud-based continuous integration service that is free for public github repositories.

As with all CI solutions, the idea is that each time you push a change to github, Travis will see it and run a script to build your project. You even get a live status indicator so you can check the last build status.

Here’s the current status of NDifference:

One small complication that you might not expect given the build up so far, Travis is more commonly used for building Ruby projects and there is no default setup for .Net.

Thankfully, because Travis is running on a linux instance it’s fairly easy to trick it into thinking it’s building a hip language project.

Here are the steps:

You can refer to the documentation for all the options but here’s my travis file for NDifference:

So first I pretend I’m going to be building a C language project (the trickery part). Then I make sure all packages are up to date before installing mono. Finally I build the project using xbuild with a specific target (/t:TravisCI) which means I bypass running unit tests. 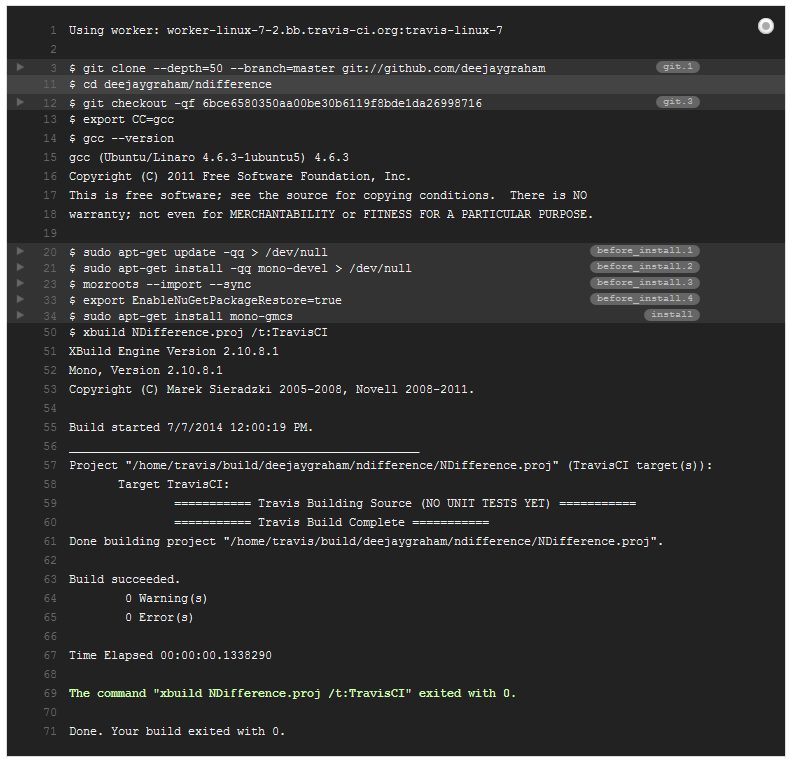 The most immediate problem I ran into was forgetting that Unix file names are case sensitive so my script kept failing when the content of the .yml file didn’t match what was on disk.

The next step is to work out how to run xUnit from this environment so I can complete the full flow and call it a genuine CI solution.